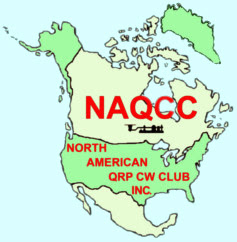 Jeff, KA1DBE recently had some good news for those interested in QRP Ops here in Downeast Maine:

Greeting all,
As I stated in the EAWA meeting, this will be an informal group of QRP operators sharing what they are doing with the rest of North America.
The NAQCC has a monthly news letter and I would like to have something to spotlight each month.  Could be new gear, antenna project, contest, etc.  Let me know what you have been up to.
Not sure how many of you are contesters but the NAQCC has a monthly 2 hour sprint.
I like sprints because they do not take a whole lot of time and it is a good way to get your feet wet in contesting if you have never done it before.
I will try to set up a FB page or group and maybe a Twitter account.
Lastly, this Saturday, I will be operating the QRP to the field (QRPTTF) contest.  I will be set up at the Ellsworth waterfront park an Marina.  Plan to get there around 8 am to set up and be on the air by 10.  Stop by and say hi if you have some time.
Thanks again for your support and let's show them how we do things Downeast!
73/72
Jeff, KA1DBE

Posted by Richard Small at 10:59 AM No comments:

Did you ever notice that electrical tape, like a hammer, comes with no instructions? Perhaps the makers figure that everyone automatically knows all the "tricks of the trade". Read on, you may pick up a new wrinkle.


Vinyl electrical tape has been around since 1945, but for a long time after it was introduced, black cotton friction tape was still used for most applications, partly because of the cost difference, partly because of tradition. I remember tearing long strips of half-inch friction tape into quarter-inch wide strips as a cost savings. A unique feature of the adhesive on the friction tape is that it gives off an eerie blue light when the tape is peeled from the roll. It is bright enough to be easily seen in a darkened room. Aside from that trivial fact today's friction tape is used for special applications only as a topcoat for delicate rubber tape as used on high voltage cable spices. Modern materials are superior in every respect. The first vinyl tape I ever saw on the job was gray in color, not black, I suppose it was a telephone company spec.
Today I recommend using only Scotch 33+ tape for all ham radio uses, except as noted at the end, as it has predictable characteristics and is good for every indoor/outdoor application. The temperature range is zero F to 220 F.


Make sure to get the type with the + sign, as there is also a plain type 33.


3M also makes product called Temflex, but again type 33+ is suitable for every application, especially outdoors.
When taping over coax connectors, or coax splice kits, it is helpful to first wrap the connector with a self-amalgamating Silicone Tape product. The 3M version is Type 70, and Radio Shack also sells it in small rolls under the part number 64-2336.

This is NOT the same product as the coax-seal, or Radio Shack #278-1645 "sealant for RF connectors". I do not care for that sticky material, dum-dum, or any other putty type material that is hard to remove later. The silicone-tape peels off cleanly and easily, so easily in fact that it needs to be covered with a topcoat of Type 33+ to protect it. This two layer approach, when applied as explained below will give a waterproof seal that is weather resistant, and stays flexible for years, but can easily be removed if changes need to be done to the system.


Any time you wrap tape on a threaded component, make sure you wrap it in the direction that tends to tighten the screw threads, not the other way. That means if you are taping a splice, for example two PL-259's screwed into a double barrel female (PL-258/83-1J) you must tape each connector from the cable end to the barrel center.
Always run the tape "uphill" that is from the smaller diameter to the larger diameter.
Start at the smallest end, make several tight turns of one-quarter lap for a good seal, then run the tape in one-half laps to the center, with moderate stretch so the diameter of the 33+ is reduced to about five-eighths of it's original width. On the last few turns reduce the stretch tension until it is zero at the last turn, to prevent flagging. Use a scissors to cut the tape end square, as a knife or ripping will add stretch to the last lap and cause it to come loose. Repeat the same strategy from the other side, and meet in the center (if it is a splice kit), overlap the left hand side tape with the right hand side tape. If the connection is to be removed at a relatively short timeframe, fold the last hat does not stick. If the tape job is permanent, simply lay the last lap down flush. Now for the best-kept secret, spray the entire assembly with clear coat enamel or other dielectric spray. I use Krylon Crystal Clear. The over-spray absolutely seals the joint and keeps the ends flat.

Non-electrical uses for electrical tape.
For taping cables to tower legs and other such jobs, consider using the Temflex or straight Type 33 as they both are less expensive and have a slightly higher breaking strength. The superior conformal qualities of the 33+ are not needed in these applications.
One of the most common non electrical uses of vinyl tape is to secure rolls of wire, bundles of tubing, cables to rungs, and many other odd jobs that use the material for other than it's weatherproof or electrical qualities. To tie up a roll of cable, the cheapest grade of black vinyl tape is adequate, except that it leaves a gooey mess behind when removed. The secret here is to make the first full two turns with the sticky side OUT. Then simply twist the tape around on itself and continue making a few more turns with the sticky side IN. This same trick can be used with cellophane tape to secure hardware store bundles of conduit, pipe etc, so that it removes cleanly. Wish I had a nickel for every minute wasted trying to get that sticky mess off copper water pipe before soldering!
Another slick idea Scotch came up with is the color-coded vinyl tape. I've tried many schemes over the years of using red, blue, green white and other color tapes to identify certain cables, for example coax cables in a bundle run up the tower. After toughly confusing myself, I decided to simply use the white tape, and mark the ID on it with a Sharpie permanent marker. Foolproof, and lasts for years.
Posted by Richard Small at 10:55 AM No comments:

EAWA held its monthly meeting on April 7th.
After the business meeting Rob, W8HAP, gave a presentation on antennas. 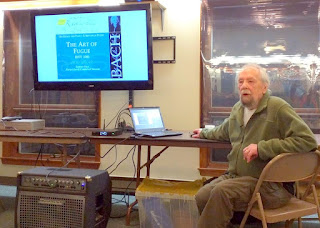 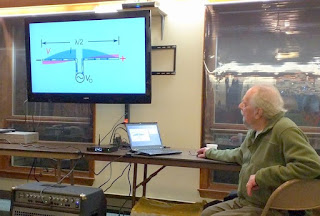 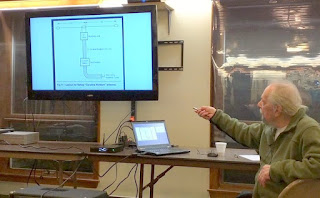 Posted by Richard Small at 10:32 AM No comments: