Phil Duggan N1EP has been in the Ham Radio community for, well, let’s leave it as a long time. Phil has held a number of titles in the radio community and I think all that’s left is Jedi. He has been instrumental in organizing and resurrecting ham activities for years. His recent undertakings are covered in the below links and hope you get a chance to check them out and participate when you get a chance in the activities!
www.mainehamradiosociety.com Local Amateur Radio news and activities

www.kidzradioactive.com Educational projects that have the potential to pique children's interest in ham radio and technology and science.

Posted by Richard Small at 11:21 AM No comments: 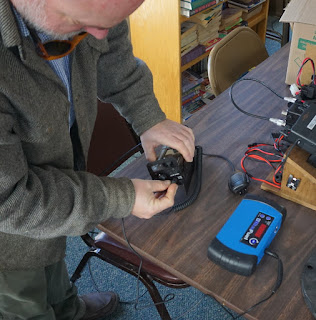 Andrew N1WMR hooking up his new QRP rig for a demo!

Rob W8HAP, Chuck AC1BS and Jeff KA1DBE discuss the finer points of wrangling coax.
Sunday Sessions continue at Meadow View Apartments here in Ellsworth, held on, wait for it...Sundays. Go figure! Great place to work on a project, study and ask questions of long time radio-active folks. And drink coffee whilst spinning tall tales of elusive DX captures! 12 noon to ?
Next scheduled Sessions are :
2/4/2018
2/18/2018
3/4/2018
3/18/2018
73!
Posted by Richard Small at 11:09 AM No comments:

Posted by Richard Small at 7:47 AM No comments: 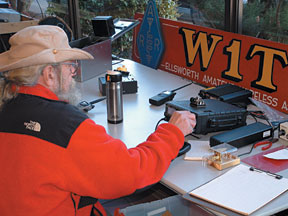 
(Evie KA1BRA wanted those interested in doing nets to know that he/she does NOT have to do both Tuesday and Wednesday nets. Feel free to volunteer for either or both.)


Phil N1EP presented a power point presentation and talk on Kidz Radio Active. This is a program designed by Phil et al to get our youth interested in science and ham radio. For more information, please go to www.kidzradioactive.com.


Slate of Officers to be voted upon:


All in favor; none opposed.


Field Day Committee – Dick W1KRP suggested that a Field Day Committee be appointed before we get much further into 2018. Those “volunteering” to be on that committee are Chuck AC1BS, Dick W1KRP, and Chris N1CJS. John KQ1P added that depending on the location Mary and Margaret KB1TPE would be willing to help Evie KA1BRA with the cooking—great cooks and lovely ladies!


Thanks, John, for volunteering them!


Donated Equipment: Burt Lowry K7HUN made the motion to give radio equipment that was donated to the EAWA by Barb Murnane WB1EHS and can be used by the Kidz Radio Active program to N1EP.


I missed who seconded the motion, but it passed.


Club Station W1TU- Dick W1KRP reported that the club station has been cleaned up and is operating. The new battery needs to be charged and stored. The station does need a power strip.


W1TU License Renewal- The W1TU FCC License is up for renewal by May. As club Trustee, Rob has done the renewal for us and it is in his name. He wanted to know if the EAWA wanted him to remain Trustee for the club call with the FCC. Chris N1CJS made a motion for Rob W8HAP to continue as Trustee and to please do the FCC license renewal. The motion was seconded by Burt K7HUN. The motion passed. Thank you, Rob!


Symposium and VE Session  - Phil N1EP will host a VE session and Symposium on Saturday,


May 19th. The symposium will be held at Meadow View Apartments  IV Community Room,


Rob W8HAP made a motion to adjourn that was seconded by Burt K7HUN, Jeff KA1DBE, Galen KB1NJC, and several others. So done at 8:08PM.


Posted by Richard Small at 7:23 AM No comments: